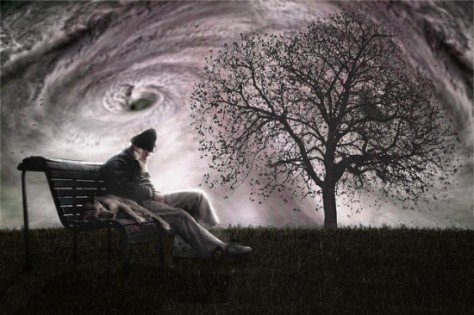 “It’s all good.” That is all I wish to say about this “put-down song” from Bob Dylan and Robert Hunter, the lyricist from the Grateful Dead. And I’m not being ironic when I say that. But is this cliche a worthy target for a Dylan “put-down”?

On the surface of things, the cliche “it’s all good” is a simplistic declaration regarding the nature of all events. It  judges all events as “good.” But isn’t it obvious that not all events are intrinsically “good?” Perhaps not. I believe there are mainly three “views” that could lead people to think the cliche is a “true” statement.

1) The first is the view of people, under the influence of New Age or Eastern religions, that use the cliche thinking that all things are “good” because everything is an illusion, an eternal duality of good and bad, or a manifestation of progressive evolution. The problems with these views are that good and evil are essentially meaningless, or that evil is intrinsically justified as part and parcel of the final “good.” In both cases the objective realities of good and evil are trivialized.

2) The second is is the view of people, under the influence of Christianity, that use the cliche thinking it is a shorthand reference to Romans 8:28 where they think it says something about “all things” being “good.”

And we know that for those who love God all things work together for good, for those who are called according to his purpose. (English Standard Version)

The knowledge of “good” resulting from “all things” is only made possible by considering the view from the future consummation of all things. When all is said and done, it will be found that all things, including bad things, somehow contributed to the ultimate good for God’s children.

Another thing to consider regarding the “religious” usage is that those doing so do not really understand Romans 8:28. They believe it is a universal and unconditional truth. The result is that the saying becomes a mantra that releases them from their responsibility to prayerfully and actively seek what God calls good. The cliche trivializes the challenge of life to a life where everything just magically works out. The trouble is that “all things” do no such thing in lives that are lived in estrangement from God.

3) The third is the view of people who, knowing that life consists of things important and unimportant, use the cliche as a means to maintain “balance.” Using the cliche is an attempt to further trivialize an unimportant event, so that we keep things in perspective. This usage in itself is fine. But the danger in this is that using cliches can become habitual and we may say “it’s all good” when something important but very “not good” happens.

Another danger is possible when the “it’s all good” cliche is used in situations when people wrong or are wronged by someone, even if these are minor offenses. It would be appropriate in situations of offense to offer apologies and forgiveness. Using the cliche in those instances trivializes offense by acting as though no offense has occurred. The problem is that this scenario feeds the “politically correct” dogma of our society in which no-one is ever wrong since “it’s all good.” We seem to be moving ever-closer to a superficial society that is epitomized by a lack of truth, openness, and meaningful communication. Saying “its all good” to others, is not necessarily a cop-out, but it can be.

So let’s not trivialize life, or the nature of “good and evil,” or “offense and forgiveness,” with the over-used cliche that “it’s all good.” The song by Dylan and Hunter provides a corrective to this trivializing cliche. Dylan has always been a master with the “put down song,” and this is a “good” one. The cliche seems to be a worthy target for a masterful “put-down.”

Talk about me babe, if you must
Throw on the dirt, pile on the dust
I’d do the same thing if I could
You know what they say, they say it’s all good
All good
It’s all good

Wives are leavin’ their husbands, they beginning to roam
They leave the party and they never get home
I wouldn’t change it, even if I could
You know what they say man, it’s all good
It’s all good
All good

Brick by brick, they tear you down
A teacup of water is enough to drown
You ought to know, if they could they would
Whatever going down, it’s all good
All good
Say it’s all good

People in the country, people on the land
Some of them so sick, they can hardly stand
Everybody would move away, if they could
It’s hard to believe but it’s all good
Yeah

Cold-blooded killer, stalking the town
Cop cars blinking, something bad going down
Buildings are crumbling in the neighborhood
But there’s nothing to worry about, ’cause it’s all good
It’s all good
They say it’s all good

I’ll pluck off your beard and blow it in your face
This time tomorrow I’ll be rolling in your place
I wouldn’t change a thing even if I could
You know what they say, they say it’s all good
It’s all good

Original Content © Bryan M. Christman and Manifest Propensity, 2013. Unauthorized use and/or duplication of this material without express and written permission from this blog’s author and/or owner is strictly prohibited. Excerpts and links may be used, provided that full and clear credit is given to Bryan M. Christman and Manifest Propensity with appropriate and specific direction to the original content.