In “Chronicles” Bob Dylan writes of a search he undertook in the early 1960’s when he first arrived in New York City. He had been singing Irish Ballads but wanted to change his subject matter. Dylan says

“I was beginning to think I might want to change over. The Irish landscape wasn’t too much like the American landscape, though, so I’d have to find some cuneiform tablets-some archaic grail to lighten the way. I had grasped the idea of what kind of songs I wanted to write, I just didn’t know how to do it yet…

…In some ways the Civil War would be a battle between two kinds of time…The age that I was living in didn’t resemble this age, but yet it did in some mysterious and traditional way. Not just a little bit, but a lot. There was a broad spectrum and commonwealth that I was living upon, the basic psychology of that life was every bit a part of it. If you turned the light towards it, you could see the full complexity of human nature. Back there, America was put on the cross, died and was resurrected. There was nothing synthetic about it. The godawful truth of that would be the all-encompassing template behind everything that I would write.

I crammed m head full of as much of this stuff as I could stand and locked it away in my mind out of sight, left it alone. Figured I could send a truck back for it later.” 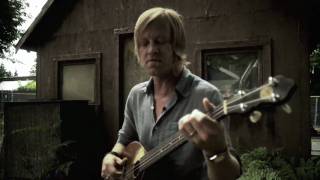 I like this song because it is in a musical style I really like, has interesting lyrics, and because it is about the forgiveness of sin. Many of us have heard or read the late Christopher Hitchens promote his view that substitutionary redemption, on which Christian salvation is based, is “morally repugnant.” I don’t wish to present a critique of Hitchens here, or a defense of substitutionary redemption, although I have found a very excellent blog post that presents a fairly comprehensive response to Hitchens. My own purpose here is simply to share this great song by David Eugene Edwards, which includes the verse,