“These are reflections on the works of love – not as if hereby all love’s works were mentioned and described – far from it, not even as if a single one described were described once for all – God be praised, far from it! That which in its vast abundance is essentially inexhaustible is also essentially indescribable in its smallest act, simply because essentially it is everywhere wholly present and essentially cannot be described.” Autumn 1847  S.K.

(From Works of Love, Author’s Preface)

“From whence comes love, where does it have its origin and its source; where is the place, its stronghold, from which it proceeds? Certainly this place is hidden or is in that which is hidden. There is a place in a human being’s most inward depths; from this place proceeds the life of love, for “from the heart proceeds life”…

…The hidden life of love is in the most inward depths, unfathomable, and still has an unfathomable relationship with the whole of existence. As the quiet lake is fed deep down by the flow of hidden springs, which no eye sees, so a human being’s love is grounded, still more deeply, in God’s love. If there were no spring at the bottom, if God were not love, then there would be neither a little lake nor man’s love. As the still waters begin obscurely in the deep spring, so a man’s love mysteriously begins in God’s love.”

277. The heart has its reasons, which reason does not know. We feel it
in a thousand things. I say that the heart naturally loves the
Universal Being, and also itself naturally, according as it gives
itself to them; and it hardens itself against one or the other at its
will. You have rejected the one and kept the other. Is it by reason
that you love yourself?

278. It is the heart which experiences God, and not the reason. This,
then, is faith: God felt by the heart, not by the reason.

346. Thought constitutes the greatness of man.

347. Man is but a reed, the most feeble thing in nature; but he is a thinking reed. The entire universe need not arm itself to crush him. A vapour, a drop of water suffices to kill him. But, if the universe were to crush him, man would still be more noble than that which killed him, because he knows that he dies and the advantage which the universe has over him; the universe knows nothing of this. All our dignity consists, then, in thought. By it we must elevate ourselves, and not by space and time which we cannot fill. Let us endeavour, then, to think well; this is the principle of morality.

348. A thinking reed.—It is not from space that I must seek my dignity, but from the government of my thought. I shall have no more if I possess worlds. By space the universe encompasses and swallows me up like an atom; by thought I comprehend the world.

349. Immateriality of the soul—Philosophers who have mastered their passions. What matter could do that?

From Pensees by Blaise Pascal 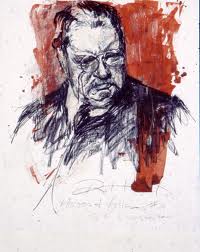 Everywhere we see that men do not go mad by dreaming. Critics are much madder than poets. Homer is complete and calm enough; it is his critics who tear him into extravagant tatters. Shakespeare is quite himself; it is only some of his critics who have discovered that he was somebody else. And though St. John the Evangelist saw many strange monsters in his vision, he saw no creature so wild as one of his own commentators. The general fact is simple. Poetry is sane because it floats easily in an infinite sea; reason seeks to cross the infinite sea, and so make it finite. The result is mental exhaustion, like the physical exhaustion of Mr. Holbein. To accept everything is an exercise, to understand everything a strain. The poet only desires exaltation and expansion, a world to stretch himself in. The poet only asks to get his head into the heavens. It is the logician who seeks to get the heavens into his head. And it is his head that splits.

From Orthodoxy by G. K. Chesterton